It’s a very gray day, like a forty’s black-and-white movie.   I’m sitting alone in the back seat of Bennet’s large gray sedan, on the left side, with my nose sometimes touching the cold glass fogged with my breath, looking through streaked lines of rain but not seeing anything but, gray.  Everything is gray. The low gray clouds, the mist that hangs over the never changing marshlands, broken only by the repetitive brown-flash flash flash of telephone poles speeding past my view, and the green-brown soggy marshlands that go on forever and ever, and ever, forever. 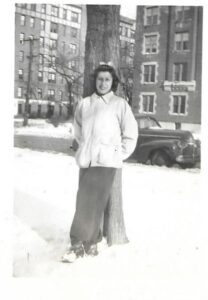 I come out of my reverie when cousin Bennet swerves the big car sharply right to avoid something in the road and I slide with it, halfway across the seat, then quickly back to the center as he straightens it out.  “You Okay back there David?”

“Yeah.” I push myself back to my perch by the window, nothing’s changed out there.

But in here, Bennet’s new wife Judith turns on the radio and the car’s dashboard speaker comes to life with, “Plastics!  An amazing plastic material called ‘Saran,’ developed by Dow Chemical is now available in clear sheets at local food stores to protect foods of all kinds from the ravages of oxygen.”

Bennet asked, “Judy, what do you think the impact of new food storage solutions like this will have on the Lincoln Store’s kitchen appliance department?  And …”

I wanted to hide, unplug them from my reality so, like a frightened tortoise, I pulled my legs up onto the back seat and scrunched against the car’s soft, felt upholstered door.  at first, I felt hurt, and angry, and In my head I shouted out at Bennet and Judy; “Don’t you know who she is to me?  What gives you the right to talk about keeping food fresh when we’re driving to her funeral?  But, I stuffed my words, feelings, and all my emotions down deep and out of the way.  After all, I did tell her not to worry, and that I can and will take care of myself.  Don’t worry Mom, I told her just a few weeks earlier.

With the side of my head resting against the felt-covered door, I listened to the repetitious thud, thud, thudding from the cement highway each time the rear tires crossed over an expansion joint.  And as I listened I mentally turned down the radio’s volume, tuned out the talking from the front seat, focused my mind, and visualized the clear plastic gumdrop tree that Mom had sent me before Christmas.

What made the tree special was that she had sent it to me.  And, I knew how hard it must have been for her to physically choose and place those twenty or so different colored gum drops at the ends of each clear plastic branch.

The tree was set up on a small vase table in the center of a sky-filed bay window that overlooked a bleak working-class Waterbury, Connecticut neighborhood.

It was Christmas break, and I was off from school, so spent a lot of my time in that living room reading, and popping a few gumdrops into my mouth each day.

My favorite flavor was black licorice, and since there were only three, and since I was only seven years old I ate the first two licorice gum drops immediately but then thinking ahead I stuck the remaining black licorice onto the plastic tree’s pointy trunk top.

Below it  were red cherry gum drops, yellow lemon drops, orange, and green mint, scattered colorfully like fruit at the ends of every twisted clear plastic branch.

But then, after a week of nibbling, not able to resist the shiny black licorice atop a now empty gumdrop tree, I plucked it off its branch and popped it into my mouth so fast that I didn’t even have time to realize, that she was gone.

I didn’t know why I did it.  I felt guilty, It was my fault.  In my eight-year-old brain, I knew for sure that she had died because I ate the black and last gum drop, and that I was responsible.

My stomach muscles tightened as we sped down the road getting closer to she who wasn’t there.

[NOTE – concatenate, combine this with above similar paragraph.

And I remembered again how I succumbed to the temptation of the candy, and how I had harvested each candy, piece by piece, for over a week, until at last, I plucked my favorite black gum drop from its clear plastic branch and I remembered too how I bravely shuddered, held back and stoically pushed away my tears and feelings.  After all, I did promise her that I was strong and would take care of myself.  Don’t worry mom, I had bravely told her a few weeks ago sitting at the head of her bed.

And, what a day that was.

—- flashback to her sickbed, oxygen-tent, deathbed.

And now her radiance and life have vanished,  and I’m on my way to her funeral in Queens, and I’m scared.

Without any notice, Aunt Ethel called me into the kitchen, sat down at the table with me and in a very adult and direct way explained, “David, you know your mother’s been sick, and that’s why you’ve been living with us for a while.   She has asked to see you.  David, she is very, very sick, and I am so sorry.  She wants to say goodbye to you before she goes, she wants to see you, she loves you so much David.

We’re here …. describe the scene …. walking in the drizzle to the store front what was obviously a small business converted to an equally small room, with fold out chairs set up under ceiling mounted florescent lighting ….

Bennet, Judith and I stepped outside the funeral home into a fine misty drizzle.   We turned right and were walking up Queens Blvd. towards the next  cross street, 193rd Ave, where Bennet’s car was parked, when I looked across the street and saw a large billboard above a chromed diner.  “Aunt Jemima Pancakes” and Raindrops flowed like tears down Aunt Jemima’s smiling face and I was jolted back to when I was five, and in a bus with a bunch of kids, on my way to my very first day at Ideal Day Camp.   I remembered crying then, I was going away from my mom for the first time, and a sympathetic camp counselor sat down next to me.

It was raining heavily, and she pointed through the bus’s window at a billboard above a used car lot that showed a smiling white bearded leprechaun wearing a green brass buckled hat and a green suit jacket and smoking a corn cob pipe, and rain drops streamed down his face and

she said, “Look, David, even the Smiling Irishman is crying today.”   And for some reason back then, that made it all better for me.

But today, my mom had gone off to camp, and I stood on the sidewalk in front of the Funeral Home looking up across Queens Boulevard at  Aunt Jemima smiling at me through the rain, and I turned to Bennet and Judy and said, “Let’s get some pancakes.”