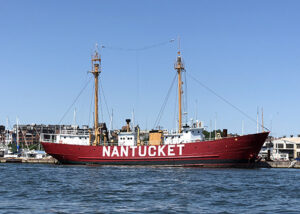 It was a six-week blur, beginning at a four-story red brick block, of a perfectly square building, with white trim around tall thin barred windows. Built in 1767. The bronze historical monument plaque said it was once a fort, and then became a prison, and was now Coast Guard Station Boston. I was given a cot next to a tall barred window, and I lay there not knowing how long I’d have to wait and not knowing what I was supposed to do with my time.  It was strange, no one telling me what to do. I was a Seaman, the lowest of the low and I was deferred to by, believe it or not,  Officers!   I was in ‘transit.’ and  condemned to wait here until the Gods deemed it was time to leave, and fly to the Arctic.

(Note …. work in the Nantucket light station boat and every day at noon its loud, repetitious and  blaring warning horn.)

I was the first to arrive in Boston and on my own. I was solitary for about two-weeks, and spent much of my time laying on my cot beneath a barred prison window in this cavernous room. I ventured out cautiously at first to probe the surrounding North Boston Italian neighborhood. North Boston, the roughest place in town:. Coasties I’d shot the shit with told me that there were gangs; ‘Northies’ that liked to beat the shit out of Coasties. And, even in civvies the gangs immediately knew a Coastie when they saw one. I immediately realized that if I were to wander and explore past the boundaries of North Boston I’d have to walk through little Italy,

I’d have to observe them, watch the way they dressed, the way they carried themselves when they walked or interacted with their friends. In short, to walk through Little Italy  I’d have to walk and talk like them.
1
Rethink, replace with new content or remove this paragraph.x

It took a few days to get the slouched, fast-walk, head-down attitude,  and my best try at a Boston accent but once I got my act together I headed off and made it through North Boston and into to a magical city….. describe etc. add color and some stories ,,,

Cookie was drunk, real drunk and leading me around from one loud dirty bar to the next getting drunker and louder and wilder as we made the rounds of smoke filled little places smelling like piss,  and years of bad nights filled with rough belligerent men eyeing us like we were aliens. And we were. We didn’t belong here, we were just passing through.

This was their turf, they lived here, and we were leaving tomorrow, and they sensed our situation like a pack of dogs smelling the hint of fear we exuded, something invisible but palatable,  marking us the enemy of Boston’s Little Italy. They envied us. We were from outside, and we could leave.  Their eyes told the simple truth: They hated us!

“Cookie “Lets get back to the base.  Now!” I was an eighteen-year-old kid an ordinary Seaman, and he was an old man, maybe forty, and he out-ranked me … a First Class Petty Officer. But, it was up to me to rationally convince this drunken madman to leave the bar, walk through the damp narrow dimly lit streets, and make it back to safety.

It was a long time ago,  and the images aren’t as brightly etched in my mind, but I do remember talking him into going outside,    Staring these belligerent men down, saying the right stuff, and somehow or other getting cookie out the door alive, me included. And then, cookie spotted a red neon sign that flashed and fizzled red and pink tah-toos from behind dirty display glass in, a dirty store-front window.

Cookie pulled me toward the window display , and pointed towards  THE   containing a   5′ X7′ wooden board around 5ft high by 9 feet long,  And the board was filled with color photos of arms and other parts, and full body filled, every square inch, with a story told entirely in tah-too  designs.

to body’s or so  tah-too designs .  “I’m going a get one, and I got to get it now, I m gonna be away from her for a full year and I got to get something to remind me of her. “He grabbed my shoulder and pushed me through the open door and into the small front office dimly lit with intermittently flashing red lighting, and said to the skinny guy at the counter, “A Dragon.”

While he was lying in the back on a gurney recuperating from the beautifully crafted blue, bright green and red coiled dragon with detailed scales that slithered up his dangling right biceps,  he proudly showed me a black & white picture of his wife, arched up naked with legs spread wide. Her white flabby skin glaring out in sharp contrast against a dark bedspread.

I stared at the flabby old woman with sagging breasts, a paunch ordinary  face, below straggly unkempt hair, and. I was facing a serious political and ethical question. Should I lie to cookie and tell him how beautiful and desirable his wife was? This had some obvious benefits. Like being able to exist on isolated duty for a full year with this crazy man. But it also had its downside. It was dishonest, and I’d feel bad about it.
But in the end I smiled and lied,  “Nice picture.” And my lie gave Cookie permission to tell me, in great detail, how much he wanted that sexy woman!  And I kept smiling and agreeing with him, all the way back to the dark block of a building surrounded by a barbed wire-topped fence called home.

The sentry post was lit up bright white, a beacon in the night …

Connie Editor(@connie)
Editor
I'd have to observe them, watch the way they dressed, the way they carried themselves when they walked or interacted…" Read more »

Yoh David, you’re a pretty good writer — from my mouth to God’s ears 🙂